Looks as though Darth Mayder is trying to distract us from the bad economic news, due mainly to her appalling incompetence?

France has overtaken Britain to take fifth place on the list of the world’s largest economies after the pound slumped to a fresh 31-year low following last month’s Brexit vote.

Bitcoin, long held as the standard for instability, is becoming a safe refuge when compared to the post-Brexit pound

Never mind, eh? I'm sure a bit of harmless rabid xenophobia won't have any long-term repercussions. Even if they do, a touch of the hard-right authoritarianism for which The Sith Lady is justly famed will paper over the cracks.
Top

Nigel Farage keeps coming back stateside. He'll be at the 2nd presidential debate as a guest of Trump. Apparently the campaign has some kind of use for a groveling British toady.
http://www.realclearpolitics.com/video/2016/10/04/nigel_farage_will_attend_second_debate_as_trumps_guest_rise_above_the_catfight.html

Cat wrote:Nigel Farage keeps coming back stateside. He'll be at the 2nd presidential debate as a guest of Trump. Apparently the campaign has some kind of use for a groveling British toady.
http://www.realclearpolitics.com/video/2016/10/04/nigel_farage_will_attend_second_debate_as_trumps_guest_rise_above_the_catfight.html

Always room for more under the big top
Top

Always helps to have someone else daffier looking than you sitting up front.
Top

Aren't you glad that we're fucking off and leaving the Sausage Munchers holding the baby ...

A baby that whinges like fuck all the time and does them stinky yellow shits on a regular basis?

With the high court ruling deciding that Parliament must vote on Brexit, can I assume a major public uproar claiming the system is rigged?
I wouldn't want to be a member of the Parliament now.

LONDON — "The British government must consult Parliament before proceeding with formal negotiations over its withdrawal from the European Union, the High Court ruled on Thursday, a move that is likely to aggravate the political uncertainty surrounding the country’s exit from the bloc."
http://www.nytimes.com/2016/11/04/world/europe/uk-brexit-vote-parliament.html?hp&action=click&pgtype=Homepage&clickSource=story-heading&module=second-column-region&region=top-news&WT.nav=top-news&_r=0
Top

They're appealing to the Supreme Court, which should be interesting. If that fails (and there's no reason to imagine that it won't) they have the right to appeal to The European Court of Appeal.

I really want to see that happen.
Top

Interesting article on the absolute bumbling incompetence of the Brexiteers. May and her cabinet should be hung from Westminster bridge.

I think Davis saw this as an opportunity to audition for the top job: bestride The Channel wrapped in a Union Flag and tell those bloody foreigners what's what, just like we did in 1940 when...we...there were all the resources of the Empire at Churchill's disposal and an actual war with an unpopular expansionist dictator. He's now discovering that he can't just bluster his way through this one.

I think May's letting Brexit fail on the merits of the people who most fought for it. There's no other explanation for sending Lolboris de Pfeffel Hogmanay St John St John Johnson and David fucking Davis to Brussels and Strasbourg.
Top

May in Parliament today:

“We continue to believe as a government that it’s important to have net migration at sustainable levels – we believe that to be the tens of thousands – because of the impact particularly it has on people at the lower end of the income scale in depressing their wages.”

Cable said on Wednesday that May had repeatedly suppressed evidence of the benefits of foreign workers. “When I was business secretary there were up to nine studies that we looked at that took in all the academic evidence. It showed thatimmigration had very little impact on wagesor employment. But this was suppressed by the Home Office under Theresa May, because the results were inconvenient.

“I remember it vividly. Overwhelmingly it has been the case that overseas workers have been complementary rather than competitive to British workers,” he said

"Ministers could cling to sweeping powers allowing them to change laws without Parliament for many years after Brexit, unless Theresa May re-writes her EU withdrawal Bill.

Despite claims the far-reaching powers being granted to ministers will expire two years after Brexit, the bill’s small print allows the Government to effectively choose how long they stay in place.

The Prime Minster faces a push from Tory MPs demanding a clearer date for the termination of the “Henry VIII powers” – so called because they allow ministers to rule by proclamation."
Top

Boris Johnson trying to sell the lie - with a straight face - that the UK will have as healthy a budget after Brexit, as compared to before:

However, Johnson said it would still be forthcoming in the future: “Once we have settled our accounts, we will take back control of roughly £350m per week.

“It would be a fine thing, as many of us have pointed out, if a lot of that money went on the NHS, provided we use that cash injection to modernise and make the most of new technology.”

Theresa May due to give Brexit speech in Florence tomorrow. Should be interesting, particularly as negotiations set for this week have been cancelled as a result. Could be a turning point in Brexit direction.
Top

The scale of the difficulties facing Brexit negotiators in disentangling the border between Britain and Ireland has been highlighted by new data showing there were more than 110m border crossings between the two last year.

The European parliament’s Brexit negotiator has launched a scathing attack on Boris Johnson, saying his recent criticism of young voters who feel allegiance to Europe was “old-fashioned” and “nonsense”.

Guy Verhofstadt told a special meeting of three committees in the Irish parliament that it was perfectly possible to feel European while at the same time feeling allegiance to your country of birth.

“Some British politicians – not to name Boris Johnson – criticise their countrymen and women for wanting to keep their European identity. He accuses them of ‘split allegiance’. I think this is a binary, old-fashioned and reductionist understanding of identity. I think we need to be smarter, more open and more inventive then that,” he said.

“It is this position that needs to be defended by our European Union just as the European Union needs to [make sure] there is no return to the past, to hard borders on our continent, and certainly not to a hard border between Northern Ireland and the Irish Republic.”

... Boris is a massive cunt. To think I used to enjoy his theatrical OTT jolly fat man on a bike schtick. Fuck Boris. His worst bullshit was repeating the other day that the UK will have their 350m a week back for the NHS! lol.

“I look at so many young people with the 12 stars lipsticked to their faces, and I am troubled with the thought that people are beginning to have genuinely split allegiances.

“And when people say that they feel they have more in common with others in Europethan with people who voted leave I want to say, but that is part of the reason why people voted leave,” he said. 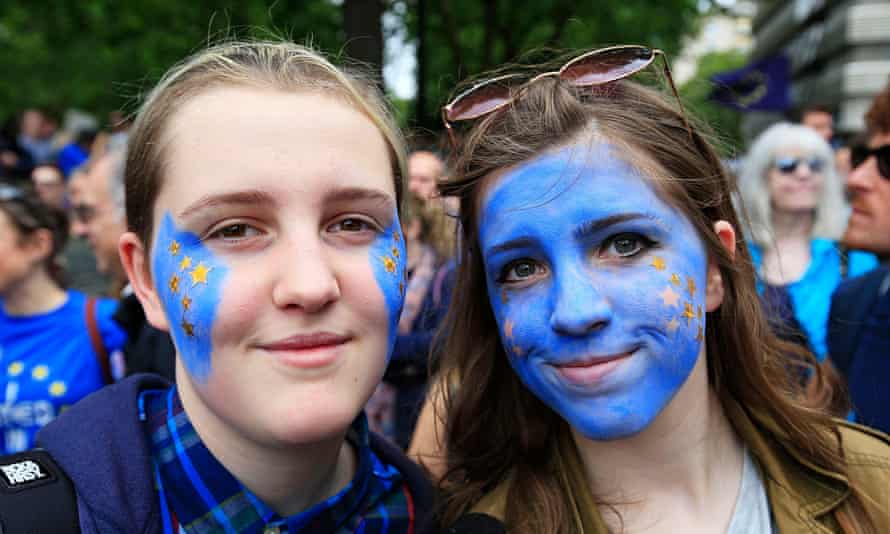 I'd give the girl on the right my allegiance. ;)
Top

Interesting to see what happens when you try to break lockstep from the inevitable march towards a Federal Europe ...

She's fucking Japanese for fucks sake - which part of Europe is that?

We might be stuck with letting every bastard from EU countries in but do we have to put up with all their wives, families et al as well!
Top

Are you out of your mind? This has absolutely nothing to do with the EU. Juncker? What are you on about? It's certain Catalonians looking to secede from Spain. You are delusional on this Des.
Last edited by Generous_J on Sun Oct 01, 9:17 pm, edited 1 time in total.
Top

Swin wrote:She's fucking Japanese for fucks sake - which part of Europe is that?

We might be stuck with letting every bastard from EU countries in but do we have to put up with all their wives, families et al as well!

I guess you actually aren't joking? That makes you a massive cunt.
Top

That’s the police force of the Spanish national government. What the fuck are you talking about?
Top

That’s the police force of the Spanish national government. What the fuck are you talking about?

The Spanish Government will have been told by their EU overlords to make sure the referendum didn't go ahead, even if it meant smacking some 'eads! ... People who don't even want to be part of Spain are unlikely to make very good sheeple in Juncker's United States of Europe!

Des, even The Daily Mail isn't saying this. If you have evidence of EU interference in Spanish regional politics, you should take it to a national newspaper. Otherwise, you should probably just give this up now because you're looking increasingly desperate.
Top

Dazzler wrote:Des, even The Daily Mail isn't saying this. If you have evidence of EU interference in Spanish regional politics, you should take it to a national newspaper. Otherwise, you should probably just give this up now because you're looking increasingly desperate.

"There's none so blind as those who will not see!"

Wait till Juncker's got control of his own private army! ... There'll be 'ead getting smacked left right and centre!

Never mind though, eh Daz! ... You get back in lockstep on your march to a new Fascist regime!

fucking hell, des. is that really what you think? that juncker wants an army and that he's going to use it to stamp out opposition to his European plans?
if you are correct then what good does leaving do us? a dirty great euro-force could pretty much just stroll across the channel and do what the fuck it likes. who's going to stop them? a few daft old men? the standing army? certainly not the young men and women who would make up any conscript army. most of them want to stay in Europe and wouldn't make the slightest effort to save the dreams of senile fools.
it's all moot anyway, brexit isn't going to happen. you know that.

on a side note, des, do you find it easier to remember details of your childhood than stuff that happened yesterday?
Top
Post Reply
309 posts

Users browsing this forum: No registered users and 5 guests